This isn’t a joke. The Disabled Superhero was created by Liquid Comics and the Open Hands Initiative.

The Silver Scorpion is an Arab teenager who loses his legs in a tragic accident, but whose powers- his creators hope- include the ability to help build bridges between the youth of America and the Arab world, starting with Syria. 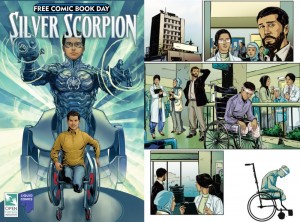 The first issue of the Silver Scorpion will be given away free across comic book retailers in the United States this Saturday May 7th as part of â€œFree Comic Book Dayâ€. In addition, a digital edition of Silver Scorpion is also now available for free on the home page of Scribd.com where it can be read online and through iPad devices, as well as shared with friends through Facebook and Twitter. A larger, magazine-sized collector version of the first issue is also available for order via HPâ€™s Magcloud print on demand service.

Silver Scorpion is more than just a new superhero; it represents a unique breakthrough in U.S. public diplomacy efforts at a crucial juncture in the relationship between America and the Arab world. As President Bill Clinton highlighted at the 2010 Clinton Global Initiative, the Silver Scorpion â€œwill help to establish trust and understanding between cultures, to empower young people with disabilities.â€

Liquid Comics Co-Founder & CEO Sharad Devarajan says the Silver Scorpionâ€™s superpowers go even further. â€œOur hope is that the Silver Scorpion will also be a positive role model to increase a dialogue and tear down some of the divisive political and social rhetoric between the West and the Arab region. Great superheroes have always been allegories to larger societal issues in the world. The bigger story of our generation is the story of globalization and our ability to overcome our regional and cultural differences to find our common humanity. While I hope people enjoy the adventures of Bashir and his transformation into the Silver Scorpion, for me, the more exciting story is how this comic book was created- from the minds of two very different groups of extraordinary youths who speak to the very best of globalization in the years ahead.â€

Snyder added, â€œWhat is truly amazing about this comic book is not just that it features a disabled superhero as the main character, but that it was inspired by youths who came from the United States and Syria. They had never met before. They spoke different languages. They had different cultures and backgrounds. Yet still, they found common ground through their creativity, and have given the world a character that transcends their differences.â€

The ten American children who participated in the Youth Ability Summit that led to the creation of the â€œSilver Scorpionâ€ say Bashir is the character theyâ€™d longed to see on the pages of a comic book. â€œThe Silver Scorpion illustrates that no matter if you are in Damascus or Des Moines, at the end of the day, we all share the same hopes and dreams,â€ said Sarah Funes, a teenager from South San Francisco, California. â€œCreating this comic has united our small group from two different worlds forever as part of a unique community, and we cannot wait to share our experiences and creation with the world.â€

Syrian students who took part in the summit said that the collaboration with American children was life-changing. â€œIt made me feel that I have to improve my life,â€ said Abdulrahman Hussein, who wants to learn English so he can meet more people and better communicate with his new American friends.

â€œWe hope the character also teaches children with disabilities to overcome the perception of their disability as a weakness, and instead find empowerment and pride in who they are, regardless of their differences,â€ added Devarajan.